This year has been so busy and hectic, I haven't even been out botanizing yet and its mid July. Today that changed and I took a trip to nearby Gravelly Run in Mays Landing, NJ. I remember the place from when I was a kid, but have not been there since. Today the natural area is owned by the NJ Land trust and an adjacent part by the Atlantic County Parks System. It is a beautiful place to see, even as parts are strewn with litter and trash which is truly a shame. Other than that it looks almost pristine. The Gravelly Run Branch leads into the Great Egg Harbor River which has a Wild and Scenic designation. I made my way back on foot and took a little over an hour to explore.  The forest has quite a few Hickory trees in addition to the more common pines and oaks. I found a nice little population of cranberries and other common bog plants like Virginia Meadow Beauty which was blooming, Marsh St. John's Wort, Highbush Blueberry. The terrain seemed to switch quickly however to upland with Sweetfern and Yellow Wild Indigo.


Shortly though, it became wet again as I entered a Atlantic White Cedar Forest where I saw Ground Pine and Sphagnum Mosses. Cedar Forests always felt magical and enchanting to me and I attribute this to the tall tree trunks, the green mossy banks, dappled shade and the sound of rushing water. There were some bright red fungi growing out of the Sphagnum moss. But what really makes them feel alive is when the "fairies" are around. By fairies, I mean the Ebony Jewelwing damselflies that flutter all about with their beautiful iridescent bodies and black wings. There were many today and I watched them flutter about. Unfortunately one got stuck in a spider web, a reminder that nature is not always beautiful, but that is well designed. The spider came running to it and immediately began encasing him for a meal.

And while I have found most Ebony Jewelwings to be camera shy, one little guy was quite intrigued with me. He allowed me to get close and photograph him repeatedly and even twice landed on my hand and checked me out. That was a first. We stared at each other eye to eye. He did not seem afraid. He even allowed me to film him eating a small bug he caught. When I was done with the photo shoot, he turned his head as I moved past him and watched me go.


As I came upon another pond, I found a Highbush Blueberry bush covered in berries. I tried them and they were delicious. I saw a beautiful lavender colored Damselfly. Birds sang in the trees and numerous frogs jumped into the pond as I walked around it. The pond appeared bluish, indicative of cyanobacteria. A tree ladder had been built with a rope for swinging out; it was obviously a popular swimming hole at one time. Sadly it was used by partygoers who didn't see fit to take their trash with them and bottles, cans and other trash were found in piles. It hurts to see such a disrespect for this place. But I know that the Land Trust does do cleanups so it will get cleaned up eventually.
﻿

﻿﻿
﻿﻿I was glad to finally get back there. On my way back to the car on the roadside, I found a nice Butterflyweed blooming with several pollinators on it including a Thread-waisted Wasp. They place felt very alive and I felt recharged after my visit. It was great to get out exploring. I am hoping to do more soon and will be happy to share my experiences.

23 AUG 15 - Tuckahoe WMA, Corbin City/Tuckahoe, NJ
This WMA is located on the county line and straddles it with entrances in both Atlantic and Cape May counties

I have been growing the perennial native sunflower, Helianthus angustifolius for several years now. This year, I tried and was thankfully successful in growing Helianthus giganteus, which is currently blooming, (first year, yay!) I have been looking for a Helianthus divaricatus, as the only plants I knew of were destroyed or stolen before I could obtain seeds. Then I learned there were two other Helianthus species in Atlantic County so I decided to go looking for whatever I could find, in particular Helianthus mollis. I had read about it being a plant found in dry soils and had heard that the Tuckahoe WMA was a good place to find that kind of habitat. So off I went to the WMA in search of Helianthus and looking forward to exploring a place I had never been to. The place is so big it took me two days to get around it. It reminded me a lot or Brigantine (Forsythe) Wildlife Refuge as there were long gravel trails to drive out in the salt marshes. I never did find what I was looking for, but I did find a lot of plants I had never heard of, which gave me plenty of homework when I got home keying these out to learn what they were. They were all huge grasses, some 12 ft. high.  Here are my new finds I am happy to share: 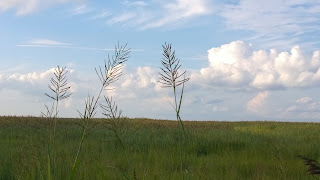 Big Cord Grass, Spartina cynosuroides.
This one attracted me not only with size, but its odd seed heads. This is a perennial, long lived plant that spreads mainly by rhizomes and reaches a mature height of 8 ft. 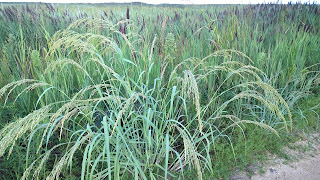 Coastal or Bitter Panic grass, Panicum amarum.  I had seen this before on restored beach projects, but had never actually seen one where nature put it. This rather common Panicum, is very similar to its close relative Panicum virgatum, Switchgrass, but is found on beaches and salt marsh edges. It has a bluish tinge to it and a fountain-like form rather than erect, making it appear quite wide. It was a beautiful grass and I would love to try growing it. 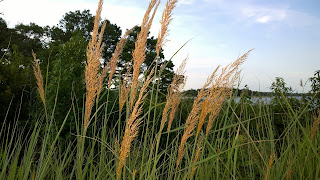 Indian Grass, Sorghastrum nutans. I have grown this species in the past, but never have I seen such fine specimens as the ones growing here. It also appeared a little bluish. They appear to be mildly salt tolerant and quite fond of the rich organic matter and more neutral pH the tidal marsh provides. 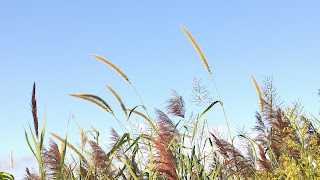 Giant Bristlegrass, Sentaria magna. This one really caught me by surprise. Not only had I not seen it in the wild, I had never read about it in any of my five salt marsh books. Yet here it was this huge plant towering way above the Phragmites and all other plants, looking like a Foxtail Millet on steroids. The bristle seed head itself was 1 1/2 ft.  with huge, wide leaves resembling that of corn, but having a characteristic light line down the center. I was truly awed by this one. This plant grows from NJ to Florida, however is rather local in populations. It is also an annual like our Wild Rice. 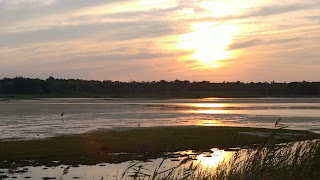 So my quest for sunflowers turned out to be a self study crash course in native grasses, but oh the serendipity of it. I did find one sunflower growing out there, but haven't yet made a positive determination as to which one it is. As I headed out the sun was beginning to set, reminding me of how much the days are getting shorter. It was a beautiful sight, and I highly recommend this WMA as a place to visit. I hope to return soon.